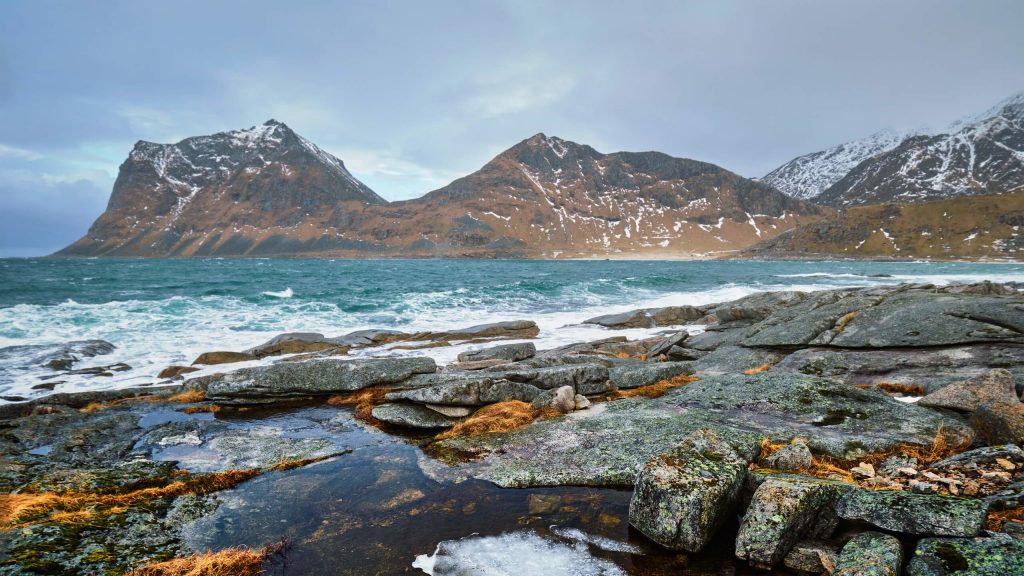 Geologically, a fjord or fiord is a long, narrow inlet with steep sides or cliffs, created by a glacier. There are many fjords on the coasts of Alaska, British Columbia, Chile, Greenland, Iceland, the Kerguelen Islands, New Zealand, Norway, Novaya Zemlya, Labrador, Nunavut, Newfoundland, Scotland, and Washington state.

A true fjord is formed when a glacier cuts a U-shaped valley by ice segregation and abrasion of the surrounding bedrock. According to the standard model, glaciers formed in pre-glacial valleys with a gently sloping valley floor. The work of the glacier then left an overdeepened U-shaped valley that ends abruptly at a valley or trough end. Such valleys are fjords when flooded by the ocean. Thresholds above sea level create freshwater lakes. Glacial melting is accompanied by the rebounding of Earth’s crust as the ice load and eroded sediment is removed (also called isostasy or glacial rebound). In some cases this rebound is faster than sea level rise.

Thresholds above sea level create freshwater lakes. Glacial melting is accompanied by the rebounding of Earth’s crust as the ice load and eroded sediment is removed

Most fjords are deeper than the adjacent sea; Sognefjord, Norway, reaches as much as 1,300 m (4,265 ft) below sea level. Fjords generally have a sill or shoal (bedrock) at their mouth caused by the previous glacier’s reduced erosion rate and terminal moraine. In many cases this sill causes extreme currents and large saltwater rapids (see skookumchuck). Saltstraumen in Norway is often described as the world’s strongest tidal current. These characteristics distinguish fjords from rias (e.g. the Bay of Kotor), which are drowned valleys flooded by the rising sea. Drammensfjorden is cut almost in two by the Svelvik “ridge”, a sandy moraine that during the ice cover was under sea level but after the post-glacial rebound reaches 60 meters above the fjord.

Jens Esmark in the 19th century introduced the theory that fjords are or have been created by glaciers and that large parts of Northern Europe had been covered by thick ice in prehistory. Thresholds at the mouths and overdeepening of fjords compared to the ocean are the strongest evidence of glacial origin, and these thresholds are mostly rocky. Thresholds are related to sounds and low land where the ice could spread out and therefore have less erosive force. John Walter Gregory argued that fjords are of tectonic origin and that glaciers had a negligible role in their formation. Gregory’s views were rejected by subsequent research and publications. In the case of Hardangerfjord the fractures of the Caledonian fold has guided the erosion by glaciers, while there is no clear relation between the direction of Sognefjord and the fold pattern. This relationship between fractures and direction of fjords is also observed in Lyngen. Preglacial, tertiary rivers presumably eroded the surface and created valleys that later guided the glacial flow and erosion of the bedrock. This may in particular have been the case in Western Norway where the tertiary uplift of the landmass amplified eroding forces of rivers.

Confluence of tributatry fjords led to excavation of the deepest fjord basins. Near the very coast the typical West Norwegian glacier spread out (presumably through sounds and low valleys) and lost their concentration and reduced the glaciers’ power to erode leaving bedrock thresholds. Bolstadfjorden is 160 meters deep with a treshold of only 1.5 meters, while the 1300 meter deep Sognefjorden has a treshold around 100 to 200 meters deep. Hardangerfjord is made up of several basins separated by thresholds: The deepest basin Samlafjorden between Jonaneset (Jondal) og Ålvik with a distinct treshold at Vikingneset in Kvam.

Hanging valleys are common along glaciated fjords and U-shaped valleys. A hanging valley is a tributary valley that is higher than the main valley and were created by tributary glacier flows into a glacier of larger volume. The shallower valley appears to be ‘hanging’ above the main valley or a fjord. Often, waterfalls form at or near the outlet of the upper valley. Hanging valleys also occur under water in fjord systems. The branches of Sognefjord are for instance much shallower than the main fjord. The mouth of Fjærlandsfjord is about 400 meters deep while the main fjord is 1200 meters nearby. The mouth of Ikjefjord is only 50 meters deep while the main fjord is around 1300 meters at the same point.