Ryan Broderick
4 min read
No Comments on Trekking in Nepal 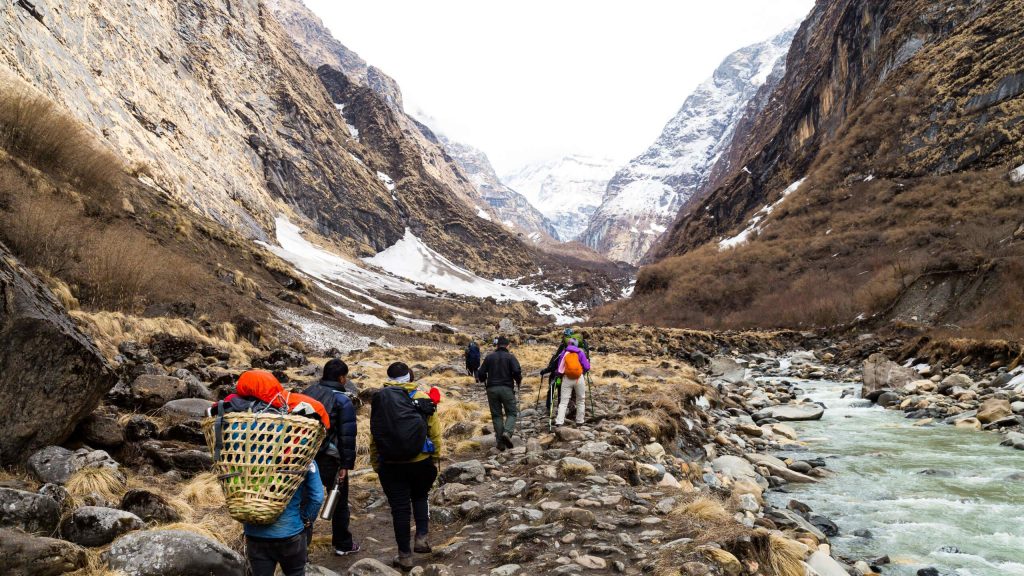 With an estimated population of 26.4 million, it is 48th largest country by population and 93rd largest country by area. It borders China in the north and India in the south, east, and west while Bangladesh is located within only 27 km (17 mi) of its southeastern tip and Bhutan is separated from it by the Indian state of Sikkim. A Himalayan state, Nepal has a diverse geography, including fertile plains, subalpine forested hills, and eight of the world’s ten tallest mountains, including Mount Everest, the highest point on Earth. Kathmandu is the nation’s capital and largest city. Nepal is a multiethnic nation with Nepali as the official language.

The name “Nepal” is first recorded in texts from the Vedic Age, the era which founded Hinduism, the predominant religion of the country. In the middle of the first millennium BCE, Gautama Buddha, the founder of Buddhism, was born in southern Nepal. Parts of northern Nepal were intertwined with the culture of Tibet. The centrally located Kathmandu Valley was the seat of the prosperous Newar confederacy known as Nepal Mandala.

The Himalayan branch of the ancient Silk Road was dominated by the valley’s traders. The cosmopolitan region developed distinct traditional art and architecture. By the 18th century, the Gorkha Kingdom achieved the unification of Nepal. The Shah dynasty established the Kingdom of Nepal and later formed an alliance with the British Empire, under its Rana dynasty of premiers. The country was never colonised but served as a buffer state between Imperial China and Colonial India. Parliamentary democracy was introduced in 1951, but was twice suspended by Nepalese monarchs in 1960 and 2005. The Nepalese Civil War in the 1990s and early 2000s resulted in the proclamation of a secular republic in 2008, ending the reign of the world’s last Hindu monarchy.

The country was never colonised but served as a buffer state between Imperial China and Colonial India. Parliamentary democracy was introduced in 1951, but was twice suspended by Nepalese monarchs in 1960 and 2005.

The Constitution of Nepal, adopted in 2015, establishes Nepal as a federal secular parliamentary republic divided in seven provinces. Nepal was admitted to the United Nations in 1955, and friendship treaties were signed with India in 1950 and the People’s Republic of China in 1960. Nepal hosts the permanent secretariat of the South Asian Association for Regional Cooperation (SAARC), of which it is a founding member. Nepal is also a member of the Non Aligned Movement and the Bay of Bengal Initiative. The military of Nepal is the fifth largest in South Asia and is notable for its Gurkha history, particularly during the world wars, and has been a significant contributor to United Nations peacekeeping operations.

Local legends have it that a Hindu sage named “Ne” established himself in the valley of Kathmandu in prehistoric times, and that the word “Nepal” came into existence as the place was protected (“pala” in Pali) by the sage “Nemi”. It is mentioned in Vedic texts that this region was called Nepal centuries ago. According to the Skanda Purana, a rishi called “Nemi” used to live in the Himalayas. In the Pashupati Purana, he is mentioned as a saint and a protector. He is said to have practised meditation at the Bagmati and Kesavati rivers and to have taught there.

The name of the country is also identical in origin to the name of the Newar people. The terms “Nepāl”, “Newār”, “Newāl” and “Nepār” are phonetically different forms of the same word, and instances of the various forms appear in texts in different times in history. Nepal is the learned Sanskrit form and Newar is the colloquial Prakrit form. A Sanskrit inscription dated 512 CE found in Tistung, a valley to the west of Kathmandu, contains the phrase “greetings to the Nepals” indicating that the term “Nepal” was used to refer to both the country and the people.

It has been suggested that “Nepal” may be a Sanskritization of “Newar”, or “Newar” may be a later form of “Nepal”. According to another explanation, the words “Newar” and “Newari” are vulgarisms arising from the mutation of P to V, and L to R.