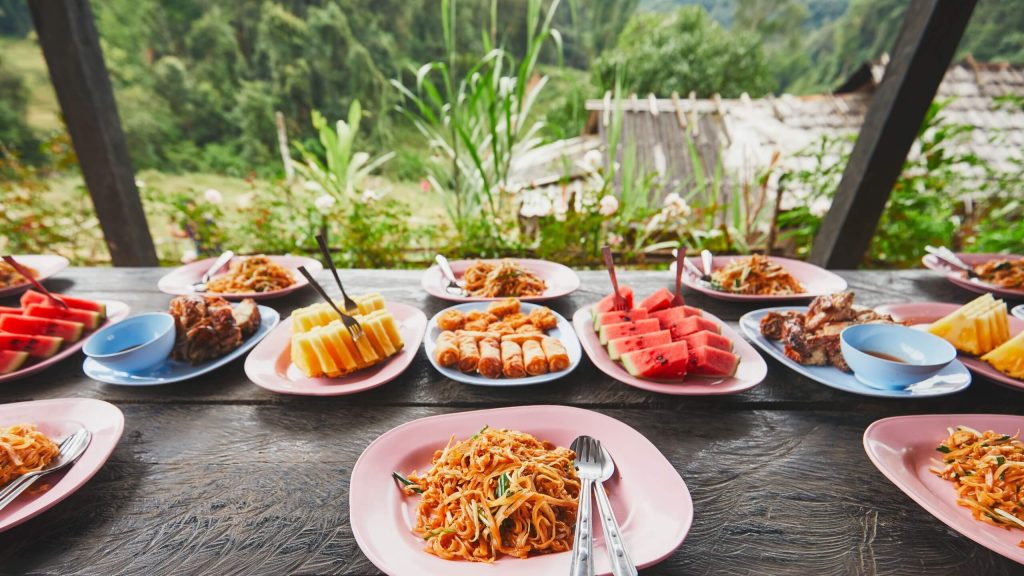 Street food is ready-to-eat food or drink sold by a hawker, or vendor, in a street or other public place, such as at a market or fair. It is often sold from a portable food booth, food cart, or food truck and meant for immediate consumption.

Some street foods are regional, but many have spread beyond their region of origin. Most street foods are classed as both finger food and fast food, and are cheaper on average than restaurant meals. According to a 2007 study from the Food and Agriculture Organization, 2.5 billion people eat street food every day.

Today, people may purchase street food for a number of reasons, such as convenience, to get flavourful food for a reasonable price in a sociable setting, to try ethnic cuisines, or for nostalgia.

Small fried fish were a street food in ancient Greece; however, Theophrastus held the custom of street food in low regard. Evidence of a large number of street food vendors was discovered during the excavation of Pompeii. Street food was widely consumed by poor urban residents of ancient Rome whose tenement homes did not have ovens or hearths. Here, chickpea soup with bread and grain paste were common meals. In ancient China, street food generally catered to the poor, however, wealthy residents would send servants to buy street food and bring it back for them to eat in their homes.

A traveling Florentine reported in the late 14th century that in Cairo, people brought picnic cloths made of rawhide to spread on the streets and sit on while they ate their meals of lamb kebabs, rice, and fritters that they had purchased from street vendors. In Renaissance Turkey, many crossroads had vendors selling “fragrant bites of hot meat”, including chicken and lamb that had been spit-roasted. In 1502, Ottoman Turkey became the first country to legislate and standardize street food.

Aztec marketplaces had vendors who sold beverages such as atolli (“a gruel made from maize dough”), almost 50 types of tamales (with ingredients that ranged from the meat of turkey, rabbit, gopher, frog and fish to fruits, eggs and maize flowers), as well as insects and stews. Spanish colonization brought European food stocks like wheat, sugarcane and livestock to Peru, however, most commoners continued to primarily eat their traditional diets. Imports were only accepted at the margins of their diet, for example, grilled beef hearts sold by street vendors. Some of Lima’s 19th-century street vendors such as “Erasmo, the ‘negro’ sango vendor” and Na Aguedita are still remembered today.

During the American Colonial period, “street vendors sold oysters, roasted corn ears, fruit, and sweets at low prices to all classes.” Oysters, in particular, were a cheap and popular street food until around 1910 when overfishing and pollution caused prices to rise. Street vendors in New York City faced a lot of opposition. After previous restrictions had limited their operating hours, street food vendors were completely banned in New York City by 1707. Many women of African descent made their living selling street foods in America in the 18th and 19th centuries, with products ranging from fruit, cakes, and nuts in Savannah, to coffee, biscuits, pralines, and other sweets in New Orleans. Cracker Jack started as one of many street food exhibits at the Columbian Exposition.