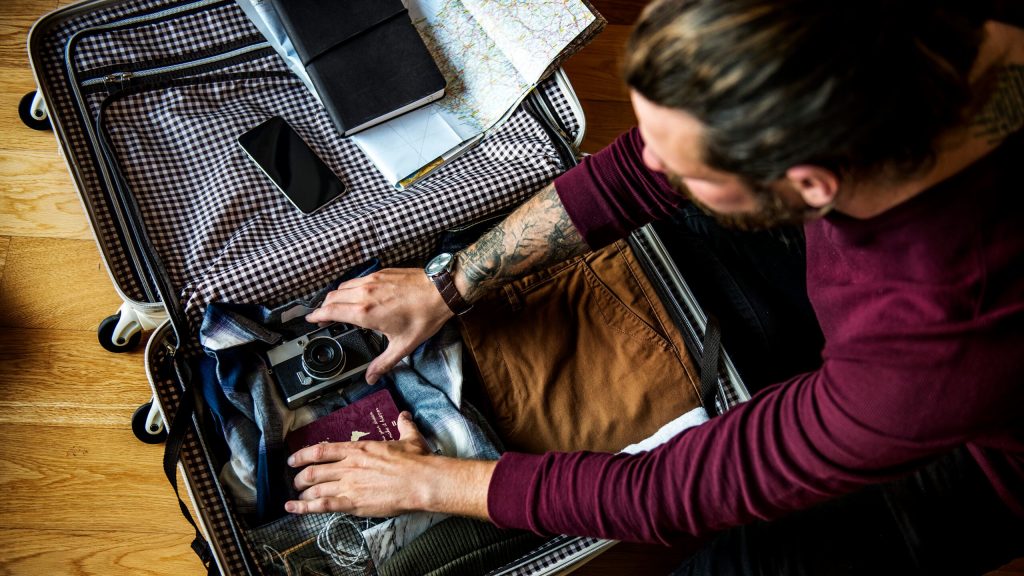 The term hand luggage or cabin baggage (also commonly referred to as carry-on in North America) refers to the type of luggage that passengers are allowed to carry along in the passenger compartment of a vehicle instead of moving to the cargo compartment. Passengers are allowed to carry a limited number of smaller bags with them in the vehicle and contain valuables and items needed during the journey.

There is normally storage space provided for hand luggage, either under seating, or in overhead lockers. Trains usually have luggage racks above the seats and may also (especially in the case of trains travelling longer distances) have luggage space between the backs of seats facing opposite directions, or in extra luggage racks, for example, at the ends of the carriage near the doors.

The International Air Transport Association (IATA) sets guidelines for cabin baggage/hand luggage/carry-on luggage size. They are not mandatory, and individual airlines can and do vary their requirements.

Hand baggage allowance is a topic frequently discussed in context of commercial air travel. On one hand, passengers may want to have more of their possessions at hand during flight, skip often time-consuming baggage claim process, and avoid the risk of having their checked baggage lost or damaged. On the other hand, safety concerns, takeoff weight limitations and financial incentives cause airlines to impose limits on how much and what can a passenger take into the cabin of aircraft.

The International Air Transport Association (IATA) sets guidelines for cabin baggage/hand luggage/carry-on luggage size. They are not mandatory, however, and individual airlines can and do vary their requirements.

The actual size and weight limits of cabin baggage can differ widely, in some cases they are dependent on the aircraft model being used, in other cases it depends on the booking class. Due to the lack of standardization a large number of different specifications were created by the airlines on the maximum permitted cabin luggage restrictions (see below). In 2015 the IATA made an effort to introduce a common smaller size for cabin luggage by introducing the “IATA Cabin OK” logo.

Major airlines have expressed their interest to accept luggage of that size on their flights. This is specified as 55 x 35 x 20 cm (or 21.5 x 13.5 x 7.5 inches). There were news that the move was backed by nine airlines including Lufthansa, Emirates and Qatar Airlines. The new size restrictions were criticised widely with the introduction program to be put on hold a few days later. Consequently none of the mentioned airlines has introduced the new format (by April 2016).