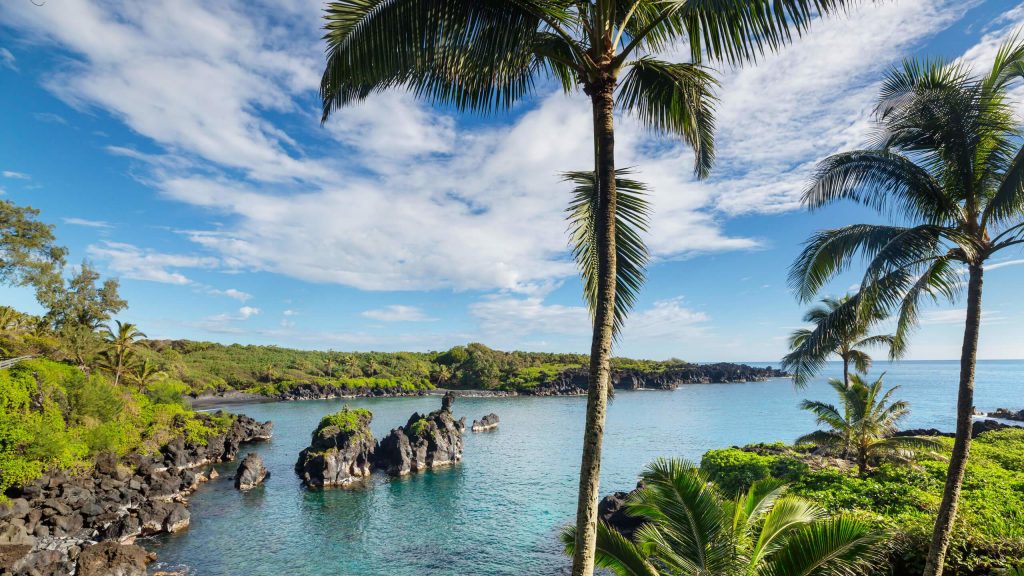 Hawaii is the 50th and most recent state to have joined the United States, having received statehood on August 21, 1959. Hawaii is the only U.S. state located in Oceania and the only one composed entirely of islands.

It is the northernmost island group in Polynesia, occupying most of an archipelago in the central Pacific Ocean. Hawaii is the only U.S. state located outside North America.

The last is the largest island in the group; it is often called the “Big Island” or “Hawaiʻi Island” to avoid confusion with the state or archipelago.

The state encompasses nearly the entire volcanic Hawaiian archipelago, which comprises hundreds of islands spread over 1,500 miles (2,400 km). At the southeastern end of the archipelago, the eight main islands are—in order from northwest to southeast: Niʻihau, Kauaʻi, Oʻahu, Molokaʻi, Lānaʻi, Kahoʻolawe, Maui, and the Island of Hawaiʻi.

Hawaii’s diverse natural scenery, warm tropical climate, abundance of public beaches, oceanic surroundings, and active volcanoes make it a popular destination for tourists, surfers, biologists, and volcanologists. Because of its central location in the Pacific and 19th-century labor migration, Hawaii’s culture is strongly influenced by North American and Asian cultures, in addition to its indigenous Hawaiian culture. Hawaii has over a million permanent residents, along with many visitors and U.S. military personnel. Its capital is Honolulu on the island of Oʻahu.

Hawaii is the 8th-smallest and the 11th-least populous, but the 13th-most densely populated of the 50 U.S. states. It is the only state with an Asian plurality. The state’s coastline is about 750 miles (1,210 km) long, the fourth longest in the U.S. after the coastlines of Alaska, Florida, and California.

The state of Hawaii derives its name from the name of its largest island, Hawaiʻi. A common Hawaiian explanation of the name of Hawaiʻi is that was named for Hawaiʻiloa, a legendary figure from Hawaiian myth. He is said to have discovered the islands when they were first settled.

The Hawaiian language word Hawaiʻi is very similar to Proto-Polynesian *Sawaiki, with the reconstructed meaning “homeland”. Cognates of Hawaiʻi are found in other Polynesian languages, including Māori (Hawaiki), Rarotongan (ʻAvaiki) and Samoan (Savaiʻi) . According to linguists Pukui and Elbert, “lsewhere in Polynesia, Hawaiʻi or a cognate is the name of the underworld or of the ancestral home, but in Hawaii, the name has no meaning”.